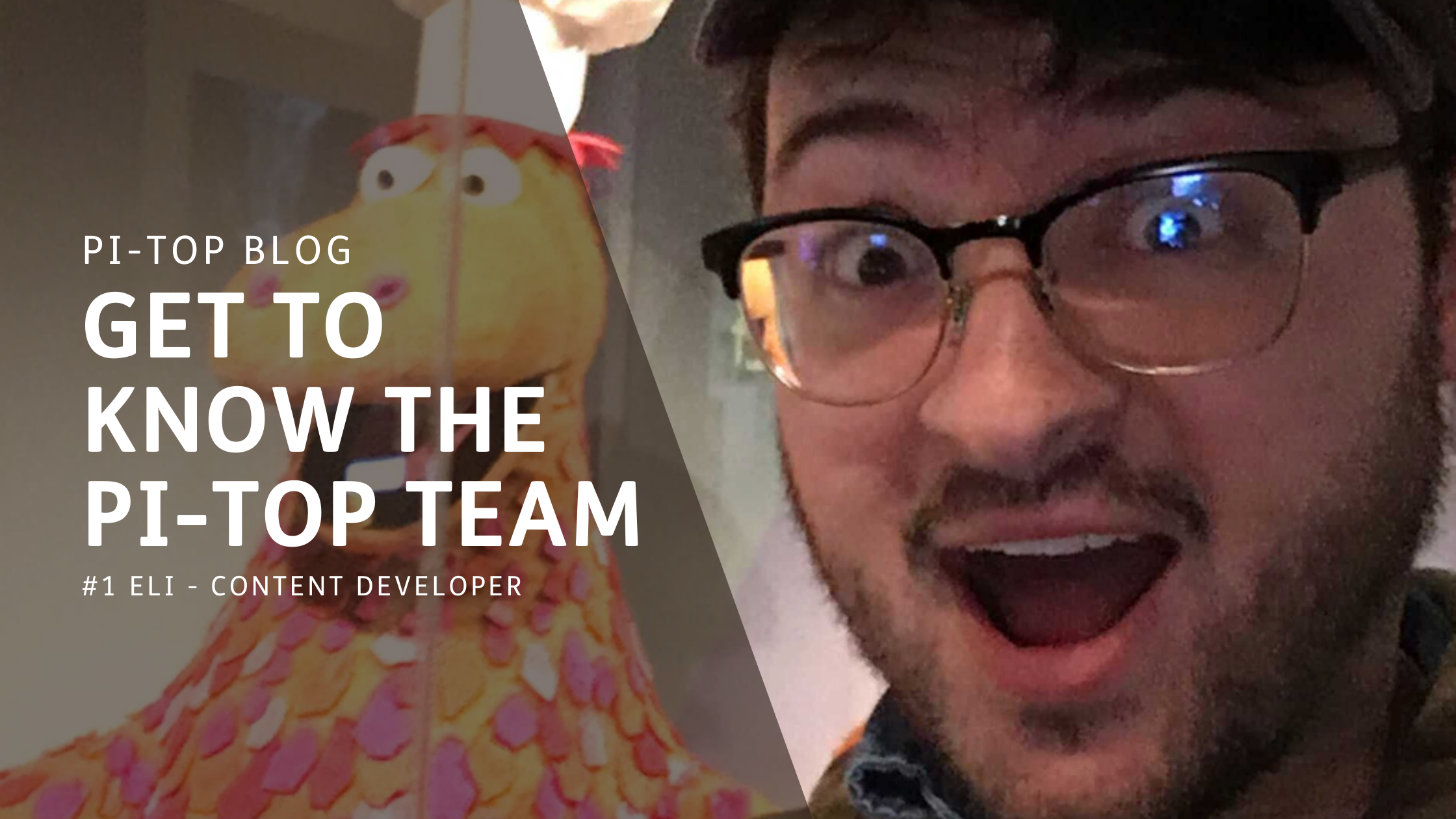 Welcome to a new series on the pi-blog, where I’ll be interviewing some of the pi-top team to get to know the people behind the magic!

I’ll talk to people from all areas of the company, in all corners of the world, to give you a better idea of how things work at pi-top. For our first session, I interviewed Eli, one of our content developers based in Austin, Texas. Read on to find out more about Eli’s role, how he got to be where he is today, and what he thinks about working at pi-top! 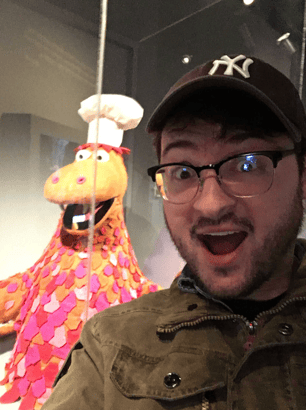 Eli with his favourite Muppet.

A: Please may you introduce yourself and what you do at pi-top?

E: My name is Eli Philips and it is important to know that I don’t know what my title is! We either say I’m in content and curriculum development or curriculum and community development.

I work with Mark and Marielle, and we refer to ourselves as ‘the content team’, which is not entirely accurate. We are actually the ‘Further content team’: creating the curriculum, challenges and educational content on Further. That is our primary objective. So whenever new lessons come out on Further that is because of us.

A year ago we had 16 lessons on Further, and now we are getting ready to launch a bunch of new content. When we do we’ll have over 30 lessons! We’ve done a lot of work in that department over that past year which is really exciting. We figure out what we want to teach people with a pi-top and how to teach it to them. We are constantly thinking about how to change Further to make it better- all sorts of stuff. 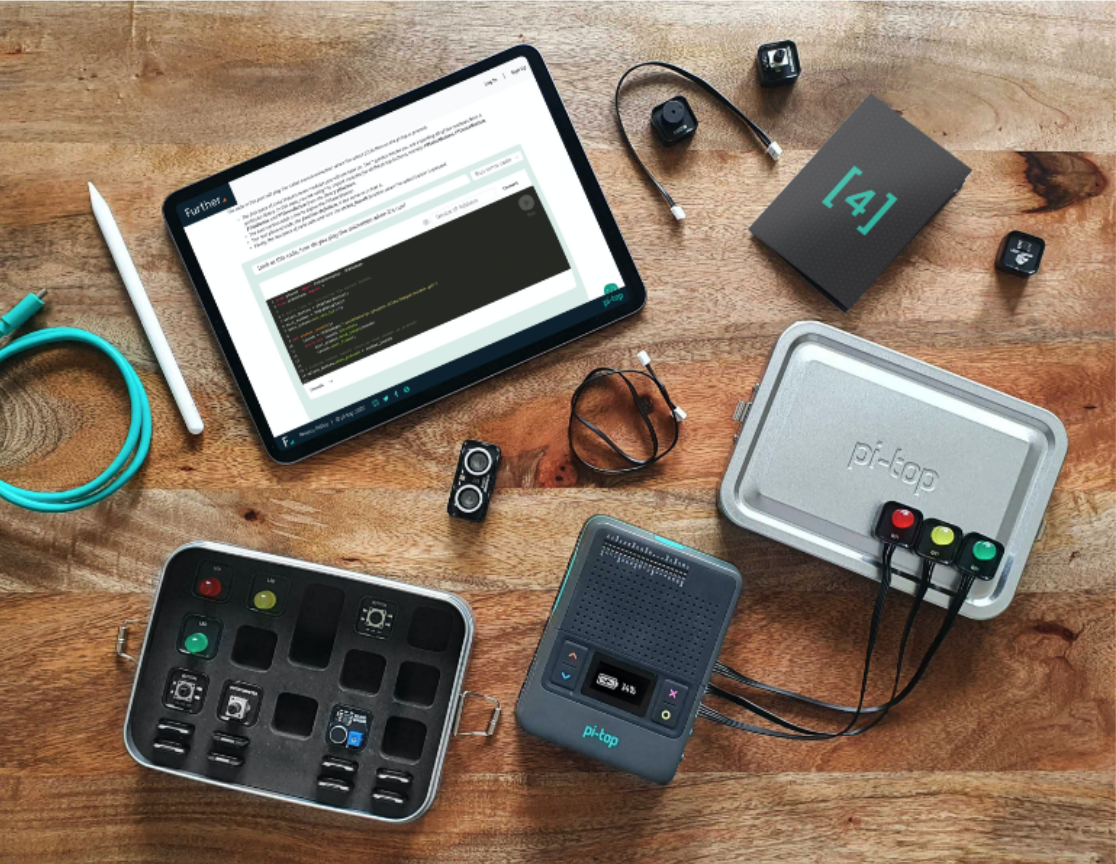 Our online learning hub 'Further' with our pi-top [4] and Electrionics Kit.

A: How did you start working at pi-top?

E: I was already a Raspberry Pi enthusiast when I started working at pi-top. pi-top conveniently was the only company that I knew of that had a presence in Austin, and that was working with the Raspberry Pi. They needed someone in tech support to help customers and I thought, well I know how to fix these things, so it was a natural fit. Plus it's a startup and I like startups. It was an interesting opportunity to work with things that I already like.

A: Can you describe an average day?

E: One of the things I like most about my team is that we meet almost every day. It's just the 3 of us and we genuinely like each other! It's late in the day for Mark because he’s in Andorra and it's early in the day for Marielle and I. So we’re just getting started and he’s basically wrapping up, which is a lot of fun. Every day we get to come together to talk about the fun stuff we’re working on, which is nice.

Or I am talking to our engineers and asking them questions about lessons we’re building. Like, ‘we want to do this thing, how can we do this?’ And they get to show me cool stuff which I didn't know about which is really exciting.

Sometimes I’m getting to play on a Raspberry Pi, or I'm getting to review lessons that we’ve written and test them. It’s creative stuff and it's fun. The only thing that's consistent about my day is that daily meeting and everything else is all over the place because we’re doing a lot of different stuff.

A: I know you have a background in education, right? You were a teacher?

E: Kind of. I worked with teachers and I taught in a classroom, but I’m not a teacher. I got to come into the classroom and do fun stuff and then leave when all of the actual responsibility came into play. Like I never had to yell at the kids to clean their room. I just got to come in and be like, “here's a cool thing and I’m gonna teach you how to use it in an educational environment.” And that was it!

It was through a program that Dell sponsored to work with a really great children's museum here in Austin, to provide professional development for teachers. So teachers would apply for this program and say, ‘we’ve got a stack of Raspberry Pis and we don’t know what to do with them.’ Or, ‘I teach English and I’m really interested in integrating more STEM stuff into my lessons.’ And we’d say, ‘Okay cool: let's train you on how to use this device, figure out the things that it can do that are relevant, develop a curriculum, and then I’ll come in for a semester and help you teach it so you then know how to teach it yourself.’

We would test the kids before and after the program to see how confident they felt about technology because the goal was to increase technology literacy. So, I’d done a lot of that but people seem to think I was a teacher!

A: Picking up on something interesting you said - how do you integrate pi-top into an English classroom?

E: That’s a really interesting question. So ordinarily in an English class, kids would have to choose a book that they’re reading and then either write a book report on that chapter or perform a sketch, or something.

But by integrating STEM, the kids can take their favourite book and a LEGO set from it and then they can demonstrate the things that happen in the chapter. Kids could take a scene, for example, from Harry Potter and integrate electronics into it so that they could press a button and play sound or audio clips. Maybe a recording of them explaining what happens in the scene, or sound effects or dialogue from the book.

Another idea would be to have students make a poster and set it up so that when someone walks up to the poster the distance sensor recognises that someone is there and the LEDs blink at different points and plays sound and stuff like that.

It's a way of taking things that the kids are already interested in, like LEGO, or Harry Potter and then bringing those things to life. Whereas you couldn't do that without the pi-top. Those are the sorts of things which I think are really interesting and exciting. 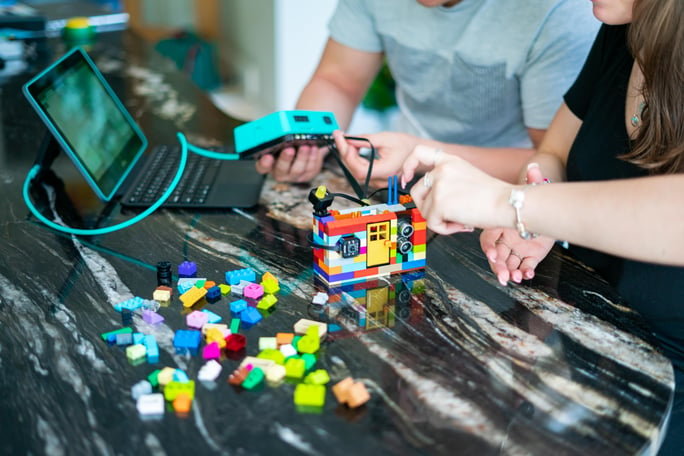 A project using the pi-top [4], Electronics Kit and LEGO!

A: What would you say is your biggest accomplishment at pi-top?

So if you want to explore all of this stuff on your own, you can. And that's a really great, fun way to get to know these things. But if you're the kind of person who learns by going step-by-step through a thing, we’re making a curated list of projects that you can do. And that journey that we are creating will take you to a place that we think is most useful for you to know. It's nice to have both of those options for users. We didn't have that before and I'm very proud that we saw what was missing and worked hard to make it better. 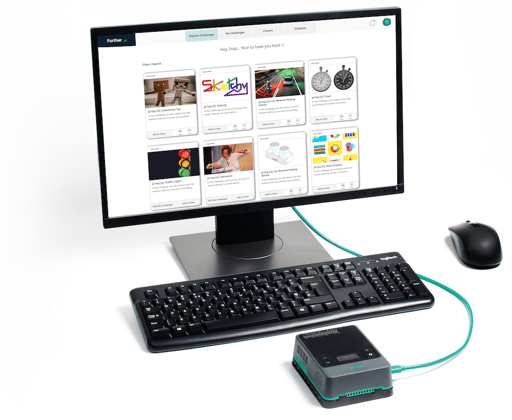 A: What advice would you give to someone who wanted to get started in this kind of content creation/raspberry pi career?

E: Something that we as a company encourage is that being really smart and talented in a specific area is great, but wanting to learn new things and try new things is also hugely valuable. I think if you want to succeed, especially now when we have so much technology and the world is changing at a more rapid pace than it ever has, you have to try these new things and be curious.

The reason why I am where I am now, which is where I wanted to be, is that in my first interview for tech support at pi-top, the woman interviewing me said, ‘if you could do anything else at this company, what would you do?’ And I said, ‘I want to work with the education team, creating new content, and helping schools who are using our stuff.’ Those two roles are very different things, but just by saying I will do this one thing and make a career jump into this thing I've never done before, it opened the door for me to do the exact thing I wanted. That is my advice to people: just try things! Try lots of stuff, and be curious!

A: I’m curious, what did you study at college? You have such an interesting journey coming to pi-top - I’m interested to know what you thought your career would look like after high school.

E: Based on this interview, if you were to guess what I studied, what would you think?

E: It was Jewellery Making.

A: Wow! That is the last thing I would have guessed. So how did it get to Raspberry Pi?

E: I was taking jewellery, sculpture and woodworking classes. I was really interested in making sculptures out of junk, so I would take things apart and work out how to put them back together in new ways and make them do new things. Then that got me into Arduino, which got me into the maker community and then that introduced me to the Raspberry Pi. And so I was wanting to bring weird sculptures to life and I needed to learn about robotics to do that, so I ended up abandoning the art side of things and just getting into that.

Trying new things, being adventurous and not just following the beaten path landed Eli his dream job. As Eli said, that ethos is a huge part of our mission here at pi-top. We want to see STEM education widely adopted in schools all over the world and, better yet, we want to actively change the way that STEM is taught in schools, for the better.

Thank you to Eli for giving up his time for this interview! It was great to hear about his journey to pi-top and all the fascinating things he and the Further Content Creation Team are working on. We do hope you all enjoyed our conversation with Eli and keep an eye on our socials to hear about our next session!