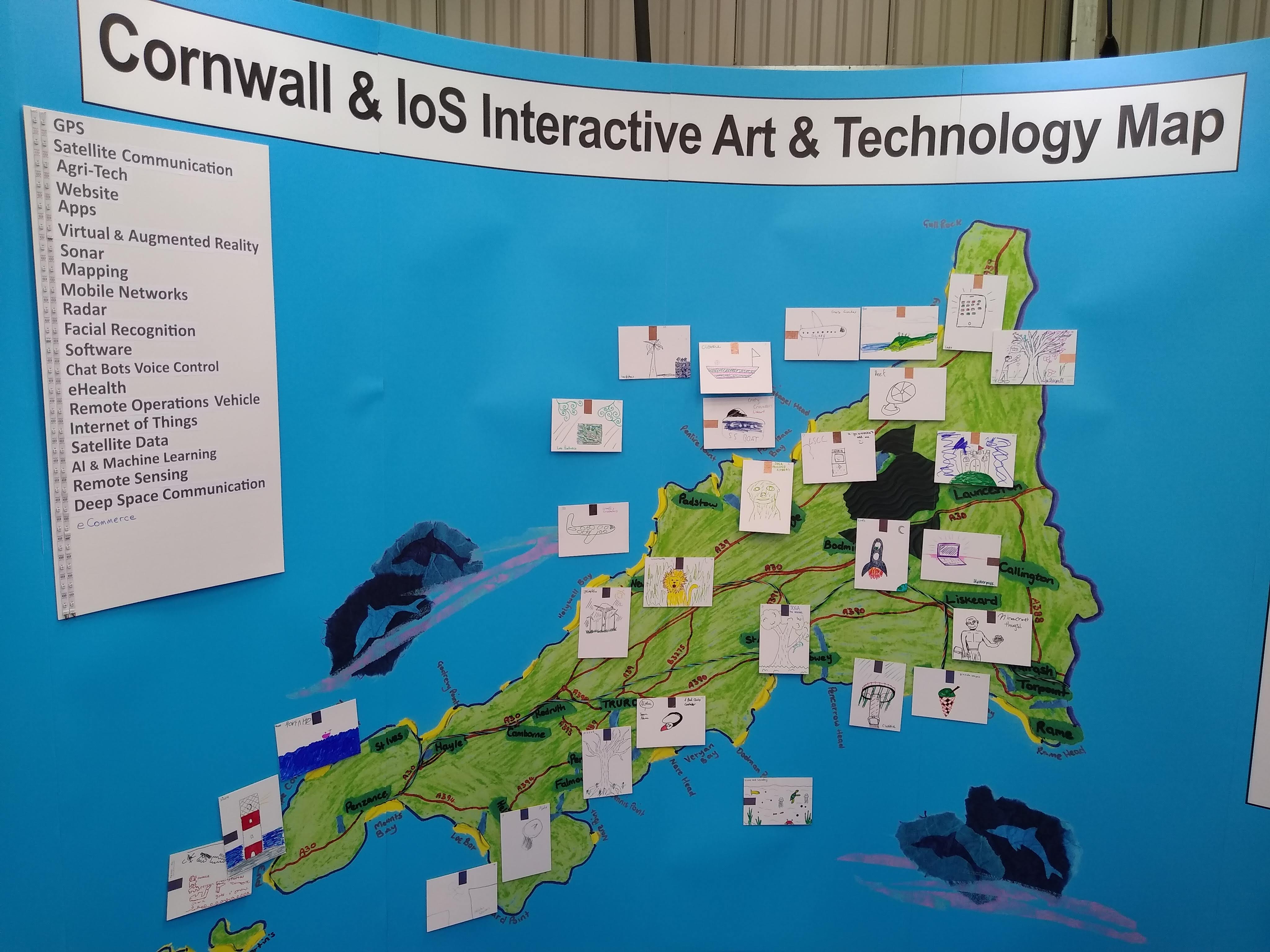 In this guest post Robert Wiltshire, from the Schools Education Outreach Project for Software Cornwall, tells us about how he worked with a local artist and students to make an amazing interactive map.

Back in 2018 the artist in residence at Goonhilly Satellite Earth Station was asked if she would be able to produce a stand at a careers exhibition for early 2019. At the same time, the call went out to companies around Cornwall asking if they would attend as well. The artist, Paula Bolton and myself, from Software Cornwall Education Outreach, already knew one another. She asked me if maybe we could do something together for the show, possibly based around an idea that had been suggested a few months earlier. This then, is the result of months of planning and a few frantic weeks building.

The idea behind this project was to engage students with technology in an artistic way, get them to think about the technology utilised in the industry around them in Cornwall and being shown to them on the other stands at the exhibition. The artwork would be touch sensitive and some simple coding would then be used by them to illustrate the connection between their chosen activity and the technologies it employed. No free giveaways but an opportunity to realise that Cornwall is not just a tourist destination famous for pasties but a growing technology area with amazing opportunities for youngsters if they embrace it.

At 4 metres wide by 3 metres high, the display was taken from an original map created by Paula using some materials recycled from dismantled satellite receiving dishes from Goonhilly. It was then enlarged to the exhibition size.

Students at the show were asked to represent their activity as a drawing on a card which had already been prepared with a piece of copper slug tape and a paperclip on the back. Once ready they were asked where on the map they would like their art to be placed. A little geography was needed here.

A sharp pin held in a champagne cork (hard work finding those) was used to make a hole in the map for the paperclip to poke through and the card was secured in place with White Tack.

Behind the map were two Raspberry Pi 3s. Connected to each of these were three MPR121 touch sensors linked by I2C. Each sensor has 12 inputs so each Raspberry Pi could handle 36 inputs giving a total of 72 maximum images placed onto the map.

To each MPR121 were connected 12 1.25 metre wires terminating in a DuPont connector to connect the paperclip end. The wires were kept short as brief testing at Goonhilly had produced a lot of miss hits on the sensors. We wondered if it was all the radio signals at Goonhilly that were interfering with it.

Each Raspberry Pi had a Python script running CircuitPython libraries to check which input was touched. The script also checked a whole bunch of 36 files to see what this particular sensor had been linked to by the student. These Pi were running VNC Server through a WiFi mobile hub.

The interactive part of the display was produced by the students on two pi-topCEEDs. These were connected to the two Raspberry Pi at the back using VNC Viewer. Once the wire connection number to the MPR121 sensor for their particular piece of work was known, this referred to a file of the same number, 0 to 35 for each Raspberry Pi sensor input. Within the file for their connection the students were asked to choose what technologies they thought their activity, depicted on the drawing, would or could utilise.

The technologies were displayed on the map. Each were numbered and those numbers referenced by the students were placed in a list to be read by the program. The numbers referred to the LED numbers on a strip of WS2812B RGB LED. A few empty lines were included in case the students thought of something we’d missed. As you can see in the following video, they did.

There were two lines of LEDs, one for each Raspberry Pi. As only 25 LEDs were attached to each Raspberry Pi and it thought unlikely that all LEDs would be illuminated at any point, the power for the LED was taken from the 3.3v line off each Pi.

Another part of the file to code were the colour values of the RGB LEDs. Students could choose from the basic colours predetermined or create their own. So each artwork illuminated it’s own series of LED to their own colour design when touched.

Once the file was saved the Python script was halted and restarted so that the newly saved file was read into the script. The artwork was now fully interactive and as each student placed a piece of work on the map the artwork built up.

As this was the very first time the map and technology had been put together in its entirety all went quite well. The LEDs had been wired from the bottom of the board instead of the top so the numbering started from 24 at the top down to zero at the bottom. Which caused a few headaches to start.

Also the LEDs flash all the time as the sensors are read when a card is touched. They do not stay on as long as the card is touched and switch off when released. Something to work on.

In future the wires from the MPR121 to the paperclips will be put in place as needed. It will be easier to keep the tangle at the back tidy. Also, some small shelves will be tied to the framework to place the Raspberry Pi onto and the sensors will be soldered onto some protoboard for rigidity. But apart from that, everything worked for nearly six hours non-stop.

The hope is that the map will be at FutureSync conference in Plymouth in April and the Big Bang Fair in Exeter in June. The main sponsors Spaceport Cornwall will hopefully provide a permanent display space in their offices at Newquay Airport. Without Spaceport Cornwalls financial support the whole idea would have remained just that, an idea.

Software Cornwall is an open and collaborative group of technology based businesses, education providers and business support organisations connected to Cornwall, UK.  The community is independent and funded by its members, sponsors and supporters.