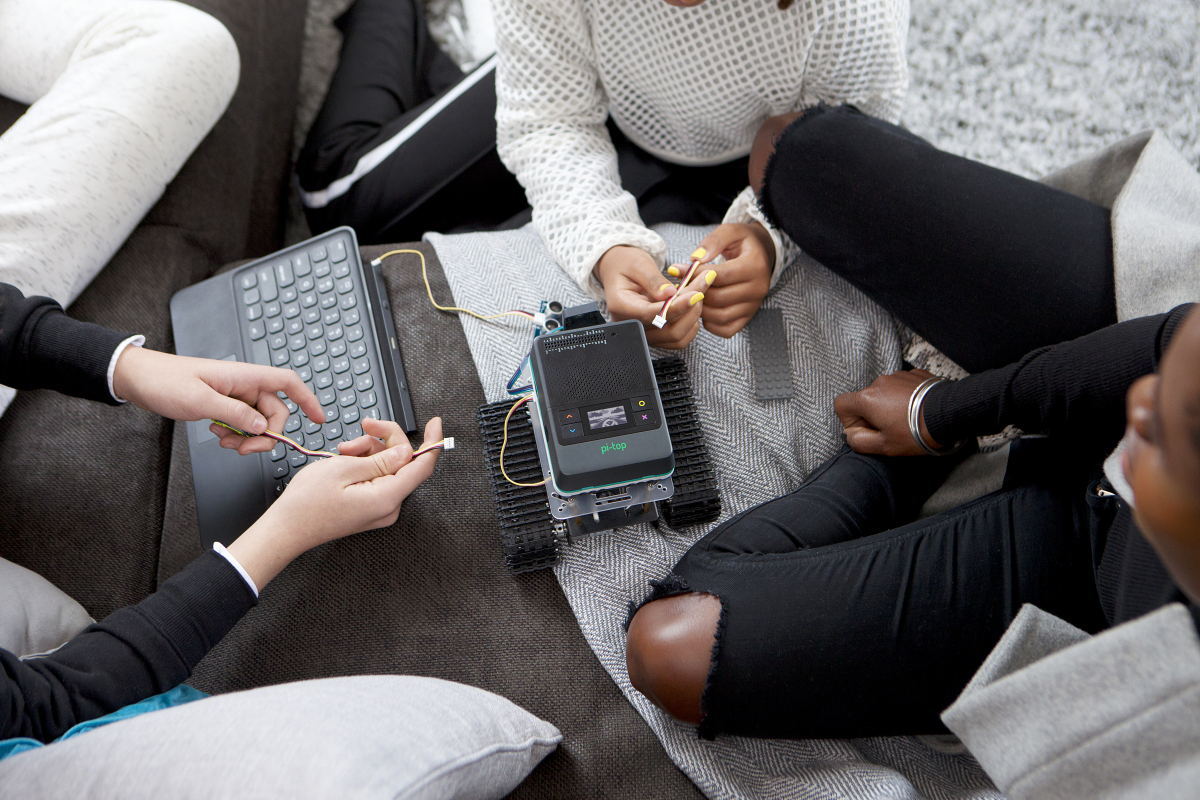 pi-top’s Chief Education and Product Officer, Graham Brown-Martin opens his desk drawer. Inside sits an early pi-top [4] prototype. It looks like a small, bright green iPad, with an exposed Raspberry Pi protruding somewhat obtrusively from its back. Already on the desk is the final production version of pi-top [4], by contrast looking every inch the educator and consumer-ready product, fizzing with potential. “It’s amazing to think what we have gone through to get from that early prototype to the final design of pi-top [4]” he says, “it’s been incredible”.


To say the last six months have been a busy time for pi-top is something of an understatement. They’ve not only designed, developed and iterated an entirely new piece of hardware but also updated the operating system too. In addition, they have revamped their corporate branding, website and community support, and launched a successful podcast. On top of all that, a newly developed CPD programme launches shortly to better support educators. “There’s not one part of this business that’s not evolving,” says Brown-Martin, “we’re developing and growing everything”.

For pi-top [4], the team used ‘design thinking’, which is a way of looking at the design process in an iterative way.

Everyone should have the opportunity to be a maker, no matter what their age

Product Manager Toby Martin Hughes explains how this worked. “We started by defining the problems within the market, then looked how to answer them. For example, having a modular unit, rather than a traditional desktop PC, was a specific response to teachers wanting to take the learning outside of the classroom. The design and engineering team would then work together on viable solutions for this.”

Designing a product to work outside also raised other issues such as power usage and product durability that the teams had to solve, but it was worth doing as it’s meant that pi-top [4] can be used to develop more varied and real-world learning for students away from the traditional classroom setting.

Further research and user testing with educators during the development process also highlighted other challenges such as the GPIO (‘General Purpose Input Output’ – a way of controlling electronics with code) interface not being that user-friendly. This led specifically to the development of pi-top [4]’s GPIO Node cable, that attaches to the pi-top [4] and extends the reach of the GPIO interface, allowing the making and electronics work more freedom of movement. But perhaps one of the most interesting features of pi-top [4] is its OLED digital display screen on the unit itself. This can display information on current projects as well as system information. VP of Technology, Wil Bennett explains how it came to be a crucial part of the product. “At first we built a couple of prototypes without a screen, but after messing around with them quickly realised that due to their modular nature, without an attached keyboard and screen, there was no easy way to interact with them.” In other words, you couldn’t tell what the pi-top [4] was doing, something that’s key if it’s being used away from a keyboard and screen on a rover or drone for example.

Having a modular unit, rather than a traditional desktop PC, was a specific response to teachers wanting to take the learning outside the classroom

With a true maker spirit, the team looked at how to change that. Wil Bennett again “We took inspiration from the HELIOS project where we built small boards with a screen and buttons to help with telemetry in the Solar Car Challenge. We liked that screen so much we decided to use the same one on the pi-top [4]. It’s a great example of how making, and messing around with things like HELIOS, although a limited run of 70 boards for a specific project, fed into the design and inspiration for our latest product. As with everything in making, everything you do is a stepping stone to the next great thing.”

It was this rapid iteration that allowed the pi-top [4] to evolve so quickly. “We learned so much,” says Bennett, “we’ve built so many versions of pi-top [4], every six weeks we made a new version. The first version was even built in cardboard! It’s amazing how fast you can prototype in that medium, and get something from your head to being accurately represented in front of you.”

Finally, inclusivity and accessibility were crucial to pi-top [4]’s development, to ensure the lowest possible barrier to entry. The physical button colours and on-screen typeface used were chosen specifically to support legibility and visual impairment issues. Also, the size, shape and form factor was designed with both smaller, as well as older hands in mind. “Everyone should have the opportunity to be a maker, no matter what their age,” says Brown-Martin, “and after all, our purpose at pi-top is to give every learner the opportunity to be inspired by making. These rules govern our design principles and in fact everything we do as a 21st-century learning company”.

In Brown-Martin’s office, we examine that early prototype. “The first iterations, in retrospect, are a bit basic, but our approach meant that we weren’t afraid to rapidly prototype, share these ideas then collaborate to test them and iterate to the point where we end up with something that we know our customers will love,” he says.

Yet despite all the planning, teamwork and market exploration, perhaps the most exciting things are still to come, when pi-top [4] gets in the hands of makers, hackers, and designers. “That’s what we can’t wait to see, the amazing things people are going to do with this,” says Brown-Martin.

This article was first published in Learning by Making magazine, Issue 3.