Topics: Projects Technology Community game Back to School how to London Schools Story 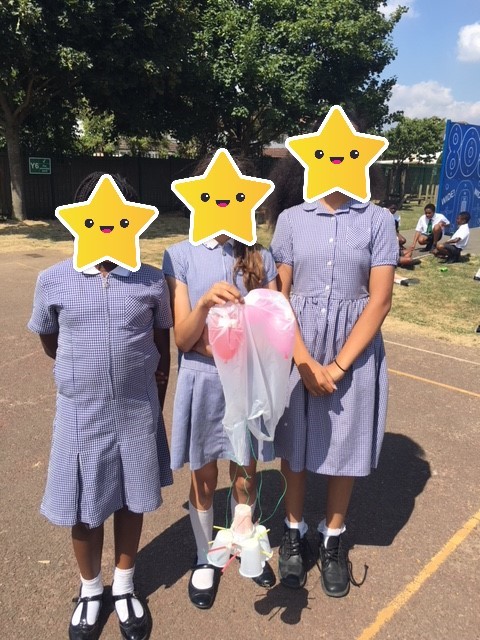 I’m currently studying for a Post Graduate Certificate in Education (PGCE) in computer science at King’s College London. I also volunteer at my son’s primary school - St James the Great Primary school in Croydon UK - helping out with all things STEM-related. To celebrate the Year of Engineering 2018 I wanted to mark it with something special, something that would engage and excite the children.

My 'eureka' moment came while watching a news report about a Silicon Valley-based company called Zipline. They operate a drone delivery system to send urgent medicines, such as blood and vaccines in remote parts of Rwanda. Watching the drone drop its medical supply from a height reminded me of a STEM activity that I partook in many years ago – the egg drop challenge. The time had arrived to meld the ‘egg drop’ with twenty-first-century tech!

And this was how I did it…

Year 6 Students were first shown a video of how drones are being used to deliver lifesaving medical supplies, followed by a discussion to get them to think about the engineering challenges required to protect the contents of the package when it hits the ground. They were then given the challenge of having to design and build their own contraption to protect a lifesaving antidote from breaking when dropped 50 metres from a drone - only this time antidote will be cunningly disguised as an egg.

Now don’t get me wrong the egg drop is a great activity in itself, but by demonstrating a real-life application of the activity, makes it easy for children to grasp how their efforts are applied to a real-world problem. Also, for that disenfranchised student who tends to disengage if they don’t understand the point of the activity, a reminder that their contraption could be used to save someone’s life quickly brings the point home.

Students worked collaboratively in pairs or threes and although not prescriptive it was suggested that each member of the team has a specific role. Teams were restricted to the following materials to build their contraptions:

The only other rule was that the contraption had to fit in a shoe box and not weigh more than 200g.

Each team was permitted a test drop, allowing students to observe the results and make modifications for their main drop should they choose to. The parachute design was the most popular by far, however, it quickly became apparent that the opening of the chute was a hit and miss affair, often resulting in their contraption hitting the ground at speed. For the second drop, the children displayed real creative flair, by improving their designs to cushion the impact in the event of parachute failure – some teams did away with the parachute altogether.

Their efforts paid dividends, evidenced by an increase of successful second round drops. The children clearly displayed all the qualities of an engineer, through refining and testing their designs they quickly realised that failure was just another step in an iterative process towards reaching a goal.

A secondary benefit of using a drone is the amazing aerial footage you can capture of the drops. As we were able to replay the drops back in the classroom, this came in very handy for our plenary activity, aiding children to reflect and think analytically about their efforts.

The event was a ‘smashing’ success and for the next one, I would love for the children get creative with video editing software to make their own mini-movies. Who knows, perhaps they’ll be editing on a pi-top soon!

Darryl Samuel is studying for a Post Graduate Certificate in Education (PGCE) in computer science at King’s College London. He tweets @madlysurreal